Dream castles and cozy cabins in the woods 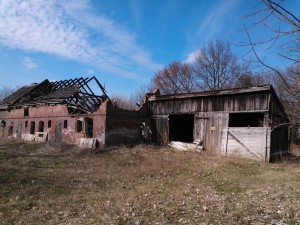 When we had the idea to found Coconat in 2012, we believed that the federal state of Brandenburg, surrounding Berlin, would be full of old farms and castles lying like sleeping beauties, waiting for our wake-up kiss. Reality is known for being a grim teacher: We looked at approximately 60 sites but none of them fulfilled our expectations. They were to small, to big, to rotten, to noisy (big buildings are mostly located on the sides of big roads), not accessible by public transport, too protected by the public office of conservation of ancient monuments or already renovated with tons of money in a way that destroyed the soul of the building. After uncounted meetings with local mayors and real estate agents, hectoliters of gas burned in our car and sore fingers from typing in requests into internet search engines, we slowly lost our steam. 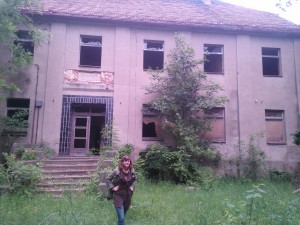 On a sunny day in the beginning of August, we had a look at an abandoned holiday camp from the former socialist German government, which was on foreclosure sale. Like many times before, the camp was a total disappointment. But then, when we were already on the way back home, sitting in our car, quietly meditating about our unknown professional future, the wonder happened. All of a sudden a very strange building popped up on the side of the road. It can described roughly as a hybrid, of a former castle of Berlin and the People’s Chamber of the GDR (Palast der Republik), nicely located next to a hill surrounded by forest: It definitely was love at first sight!