For months we scanned the world pretty systematically, but it looked like we were alone. There are tons of seminar houses out there, plus artist residencies and congress hotels. There are coworking spaces in tourist destinations like Ko Lanta, Bali, and Gran Canaria. There are providers of workation trips to interesting cities, beautiful beaches and to Brandenburg. But, a place like ours, located in nature and built for nomadic laptop workers from the creative hubs, didn’t seem to exist on planet Earth.

After these lonely first months, at the corkworking conference in Barcelona in winter 2013, we finally met a group of people that had the same thoughts and came to the same results we did. The very nice owners of the coworking space Mutinerie (French for mutiny) from Paris were planning to turn an old farmhouse, from 1780 in Saint Victor de Buthon and 90 minutes from the capital, into a retreat for laptop workers. 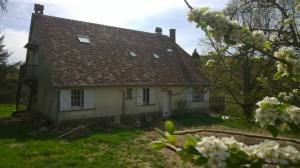 The historic farmers house is the heart of the space

Since it became clear very fast that we needed more time to talk than the short breaks of the conference, Julianne and Janosch travelled to France in spring 2014 for six weeks. We were working in the coworking space in Paris and at the almost fully renovated Mutinerie Village, beautifully located between apple plantations and wide-open cattle range land.

During these productive weeks, our French friends and our-selves were thinking about products and names (this is were we came up with Coconat!) and exchanged knowledge about similar ideas worldwide. For sure we planed future common projects and how we could use the network Copass, which also belongs to our partners, to connect to other projects like our two.

Mutinerie Village is now open, and offering permaculture farming in addition to coworking and is already very successful.

Permaculture is part of the concept

Thank you very much for the good time in France. We planted a seed, by working together and creating a partnership, from which we expect much more to grow.

To our common future and that many new places like ours will open up – cheers, Prost, and santé!

Dream castles and cozy cabins in the woods »